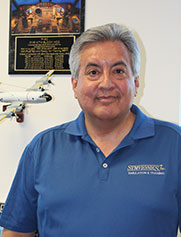 Lawrence Barraza has served as Chief Executive Officer and President of SYMVIONICS since he co-founded the company in 1988. In this capacity he oversees the strategic planning, direction and operations of the company.

Before founding SYMVIONICS, Mr. Barraza worked at Douglas Aircraft Company. There he led the systems engineering of the C-17 Flight Hardware Simulator as well as the design and development of the associated Avionics Integration Laboratory.

Prior to Douglas Aircraft, Mr. Barraza began his career with Northrop Corporation working on both the F-20 Avionics Simulator and the B-2 Stealth Bomber Full Mission Simulator. It was during his work at Northrop that he met Richard Weeks with whom he would later co-found SYMVIONICS.

Born in Los Angeles, California, Mr. Barraza earned his Bachelor of Science degree in Aeronautical and Astronautical Engineering from the Massachusetts Institute of Technology. He has also taken private, commercial and instrument ground school.