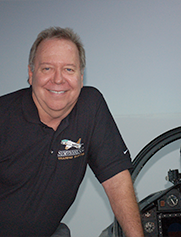 Richard A. Weeks has contributed over 42 years of service to the Nation’s aerospace and defense industry. These contributions have been both technical and managerial. He co-founded SYMVIONICS with Lawrence Barraza, and SYMVIONICS has grown to be a Nationally-known provider of services and products to the Department of Defense and NASA, including high technology training systems/devices and innovative flight test software products. Mr. Weeks has served as the Executive Vice President for SYMVIONICS since its incorporation in 1988, where he is responsible for all marketing and business development efforts. Prior to SYMVIONICS, he was the president of SETACORP (a small consulting company). Earlier in his career, he was employed by Ball Aerospace for two (2) years and Northrop Grumman for over eleven (11) years.

Mr. Weeks’ technical experience includes developmental support to some of the world’s most technically advanced aircraft, such as the F-22 Air Dominance Fighter, the B-2 Stealth Bomber, and the C-17 Airlifter. Other aircraft that he has supported includes: F/A-18, F-20, F-5E/F, YF-17, A-10, A-7, A-6, MH-130E/H, AC-130E/U, MH-53J, MH-60G, and numerous other classified aircraft. He was also involved in the development of the High Speed Antiradiation Missile (HARM) and the Walleye glide bomb data link.