On February 13, 2020, SYMVIONICS, as a partner of the Metis Flight Research Associates, LLC (MFRA) Joint Venture, was recognized by the NASA Ames Research Center Director for its responsiveness when it reassembled a 10-year-old lunar lander simulation in 30 days, enabling the NASA Administrator to demonstrate the concept of returning to the moon to members of Congress and the press. Shortly thereafter, the Administrator “flew” Vice President Mike Pence in the simulator as well.

Since the early 1980s, the NASA Vertical Motion Simulator (VMS) has served the aerospace community through its unique, six degree-of-freedom motion capabilities, and has a storied history of enabling pilot handling qualities research of all types of piloted aircraft and spacecraft. During the Space Shuttle era, the VMS was used to conduct engineering experiments and trained every shuttle astronaut pilot in shuttle landing procedures. In the last week of April 2019, the VMS management team was given the task to ready the VMS for a Lunar Lander simulation on May 31, 2019, to host the NASA Administrator, Mr. Jim Bridenstine. 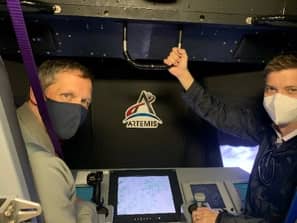 The final demonstration for the NASA Administrator was a resounding success. The VMS Team pulled off a highly-challenging feat of engineering under significant time pressure, and demonstrated outstanding professionalism and dedication. The Lunar Lander simulation has since become a focal point of multiple high-level visits to NASA Ames, including Congressional representatives, the NASA Administrator, and the Vice President; who are critical decision makers for the Artemis program. The VMS Lunar Lander capability drives home a realistic vision of Artemis, understandable and appreciated by NASA stakeholders. The R&D community will also benefit from the resulting capabilities, and will be the focus of industry partnerships who can take advantage of the simulation to test, evaluate, and certify a range of Lunar Lander designs and astronaut-pilot procedures, and train future astronauts on the critical landing phase of the Artemis missions.